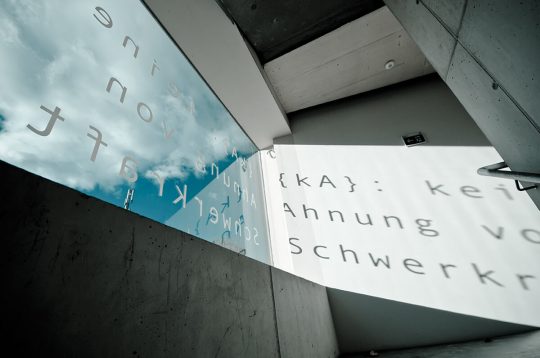 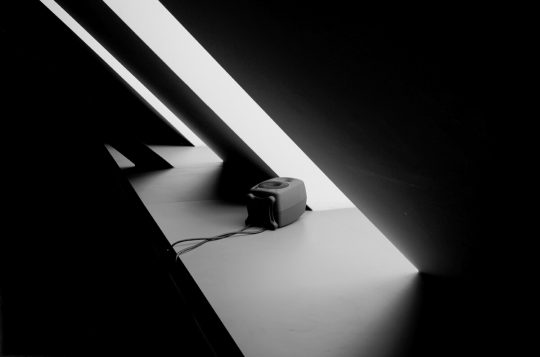 The real task at hand is pinpointing the very moment when the known world and one’s perception thereof “collapses” and then enabling the audience to perceive this moment by getting them to notice it on their own. A new world arises out of and disappears back into the point of friction between the two, where the inner and outer worlds, the center and the periphery come into contact. This experience can only start to exist in one’s own ear, where through practice and careful repetition of these moments of “collapse” a new world is created. And that is everything.

Architects and developers mostly plan and build according to visual criteria which acoustically affect then – mostly unreflected – residents, users and passers-by.

Within the scope of the series of works {kA}: Oblivious to Gravity these effects were explored and interpreted in six vacant buildings in different public and private architectures in Europe since 2010. These investigated sound spaces were understood as space-sound scores and opened up for public experience in form of concert installations.

With an instrument, self-developed over the cause of 5 years, containing computers, software, over 30 loudspeakers and microphones, characteristic sounds of the site are explored – measured, recorded, analyzed, artistically interpreted, rhythmitized and compared to other sounds from previous rooms, spaces and places – in the context of the current space’s reverberation and architectural characteristics. Sounds are played back and listened to over and over again – in various spatial constellations, in corners, in cabinets, with open doors, with closed doors, at different times of the day, with different sounds in the background, from different directions – from outside and inside the building, and at different states of physical and psychological disposition. The research and installation of acoustic features creates spaces within spaces. By doing so the acoustic architecture of the site becomes apparent,

The aim of the series of works is the artistic staging of unheard and overheard sound spaces in empty everyday architectures which always become a starting point or integral component of the sound composition and its presentation by exploring its architectural state, history and surroundings.

Alte Gerberei: Anna-Neumannstraße 20, Murau 2012.
Commissioned by the REGIONALE 12, the festival of contemporary art and culture Austria.